Mother Robot raising Child in a bunker to regenerate mankind

Many years ago the world was hit with a sudden catastrophic event, a apocalyptic event that resulted in the extinction of humanity, this mass extinction led to the demise of all living things on earth and coincided with a large meteorite impact,

pollution and radiation destroyed what was left of the world, it would take 1000 years or more before mankind would ever be allowed to set foot on earth, soon after this event the sun reached heats never herd before, sending radiation solar flares directed strait to earth, earth became desert, every living thing on earth was doomed to never exist again.

but little did you know, a boy by the name of Giuliano Del Borrello at the age of 8 years old came up with an idea embedded in his DNA to save humanity in the case of an extinction of mankind, so he expressed his idea in expression and creativity with pencil on paper.

soon after this drawing got out to the public he was surrounded by people asking questions about his drawing, he was sat down and interviewed private at his school once a week for almost 2 years. he knew from the start his idea embedded in his DNA was important to the survival of mankind, but he didn’t want this information to go to the wrong hands to people that would manipulate this safe house bunker to their own advantage to obtain power on earth. so he needed to be careful on what information he let out and to who. his information in a post-apocalyptic setting to save humanity lead to creation.

this creation sparked creativity below the grounds of our world, our human descendants built a secret safe house bunker that is protected from the outside by thick steel walls in the case of any invasion or catastrophic event.

within the bunker special programmed robots with many tasks were built to operate the secure bunker, these robots don’t only look after the facility, they protect and look after all the human embryos stored within the safe that is guarded by the reactor robots at all times, the mother robots will keep the human embryos alive for thousands of years, the facility also stores seeds, animal embryos, fish eggs, with all what was on earth before the apocalyptic event, the reactor robots are also programmed to protect this aria of the facility.

when its scheduled time activates for the robots to start the produce of humans, the solari robots will implant human embryos one at a time into a womb, which then gives birth to babies. Once the babies are born every baby will have its own exclusive robot mother, the solari robot will become (ROBOT MOTHER) it will raise and take care of the baby using the food, medicines and other supplies stored within the bunker.

while the robot mother and child is taking place in other sections of the bunker, other special robots in another private section of the bunker kept top secret from all eyes and protected by many reactor robots, are about to clone the creator inventor of the facility as to his wishes to be cloned on every “his death” and on every reset of the facility, the creator Giuliano Del Borrello can not be exterminated by the robot – robots, as he is “their creator inventor”, the robots are programmed to obey every demand made by him, the robots will protect him by any harm at all times.

vice versa for the rest of the children, when he or she reaches school age, the robot will then educate the child on the knowledge of mankind, “Robot mother” will then give the child tests to take measures to check the child personal qualities, personal performance, and the child reliability. This process is intended to produce the best humans to regenerate humanity. As such, humans that are deemed unfit will be exterminated by the robot – “robots”. as we do not want to make the same mistakes as our past descendants have made to the world and to every living soul on earth, its for a better world a world that will be respected by our kind.

If the robots believe that it is safe for the human to leave the bunker to re-enter the world, the doors of the bunker would open, and the human would re-enter the outside world. Once the human leaves the safe house bunker, the facility is reset to produce other humans, and the cycle continues. 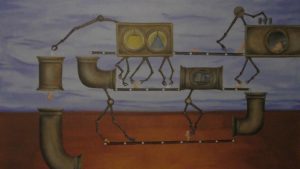